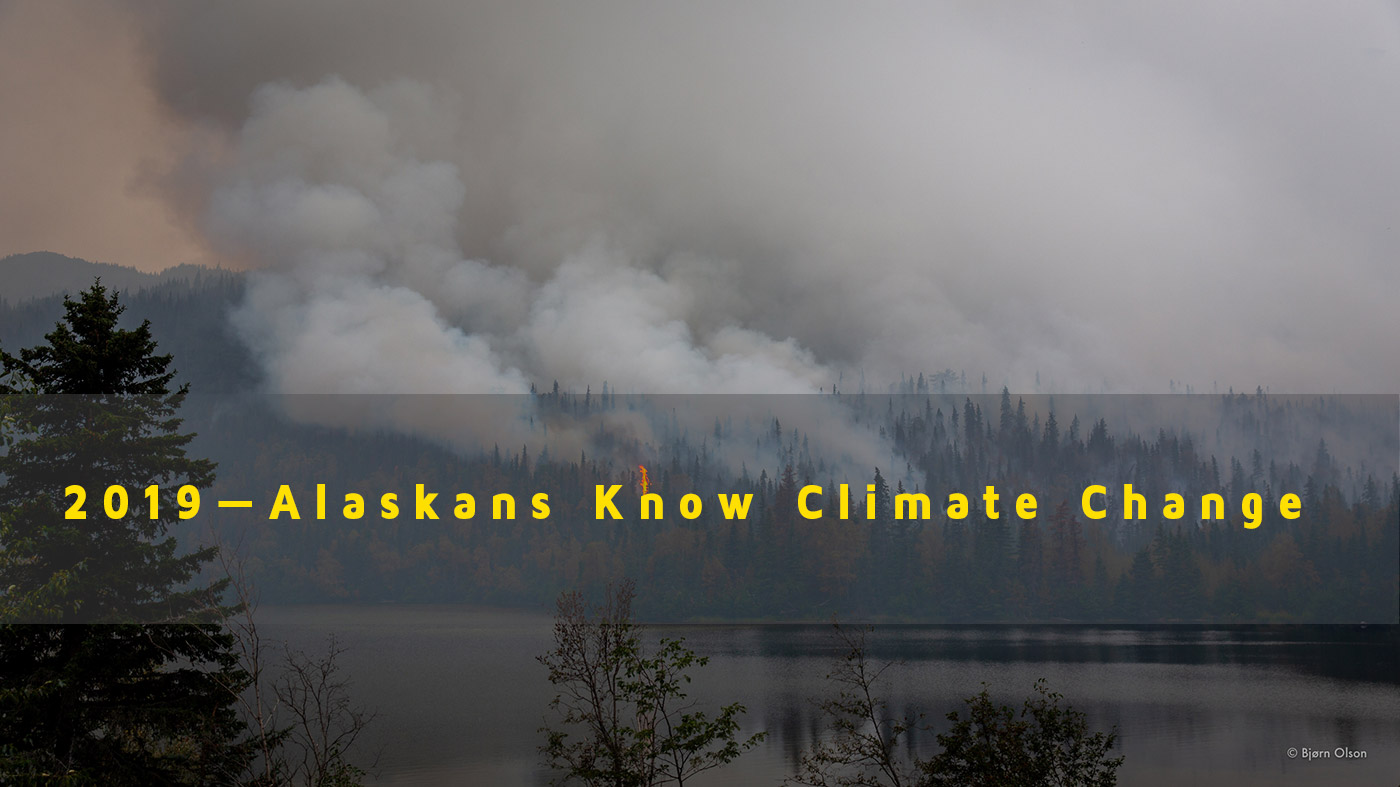 “We need to focus every inch of our being on climate change, because if we fail to do so then all our achievements and progress have been for nothing and all that will remain of our political leaders’ legacy will be the greatest failure of human history. And they will be remembered as the greatest villains of all time, because they have chosen not to listen and not to act.” - Greta Thunberg

In the fall of 2016, Kachemak Bay Conservation Society began to fill a void in Alaska—a homegrown climate change education and advocacy campaign. Alaska, along with the rest of the Arctic is warming at twice the rate of the mid-latitudes. Anyone who has lived here for any amount of time has first-hand experience with this rapid and unnatural warming. Alaskans know climate change.

The United Nations Intergovernmental Panel on Climate Change issued their 5th Climate Assessment Report last fall. The findings? Our civilization has little more than a decade to radically decarbonize our economy or face the reality of a 1.5º C warmer world. In order to achieve this target, by 2030, we must reduce our emissions by 45%.

Annually, we are currently producing over 40 billion tons of greenhouse gasses. Every year, despite the education, state, national and international reports, real-world observations of a crumbling climate system, climate talks and agreements between nations emissions continue to actually increase.

Summer 2019 has been a wake up call for many Alaskans who have relegated climate disruption to a back-burner issue. Reports of our seas being 5 to 15 degrees warmer than usual; dead marine mammals, birds and shellfish; salmon dying before spawning all over the state from heart attacks due to warm water; salmon riddled with parasites; record number of forest fires that have dimmed our skies; droughts in Southeast; and record breaking temperatures are a few of the sobering examples of what we are seeing—all of which are harbingers of the grim reality that awaits us. Climate change is not a back burner issue; it is the issue of our lives. Climate disruption is an existential crisis and we must respond accordingly.

Alaska is a canary in the coal mine. We are beginning to understand what a 1.5º C warmer reality looks like.

Attitudes and comprehension about the climate crisis are still incredibly varied. Some people stubbornly remain in denial, some believe we can adapt our way through this crisis without addressing our carbon footprint, and others have given in to grief. However, a small but unflinching number of people have appraised the situation and are not willing to give up. If we do nothing, it is estimated that 1 million animal and plant species will be threatened with extinction, within a few short decades, more than ever before in human history. Our planet’s incredible biodiversity, we believe, is worth fighting for. Do you?

As a society, we have done a terrible job discussing the problem and, more importantly, the solutions. The fossil fuel industry has understood since the 1970s that the use of their products would increase the greenhouse effect and cause global warming. Instead of sharing this body of knowledge with the rest of the scientific community and the media, they suppressed their internal findings and instead funded anti-science think tanks to help sow doubt. It worked.

Alaskans Know Climate Change (AKCC) is attempting to remove this veil of deceit. The science is irrefutable—our civilization’s reliance on fossil fuels is causing climate disruption and ocean acidification.

One profoundly important resource that provides solutions to the climate crisis is Project Drawdown — The Most Comprehensive Plan Ever Proposed to Reverse Global Warming. This blueprint is an antidote to our collective deficit.

Project Drawdown is described as, “a world-class research and communication organization which serves as a non-partisan, non-commercial, highly-trusted source of solutions to reverse global warming.” It is a book, a manual and an online resource for governments, communities, entrepreneurs, and individuals looking for zero regret solutions in our struggle for a livable climate system.

As an education and advocacy campaign, AKCC is attempting to encourage and inspire better understanding of the crisis we are in and actions we can and must take to avert the worst-case outcomes. Over the last year, we have written many articles, letters to representatives, and opinion pieces for various media outlets; we have produced our first podcast, which we intend to make more of; supported Erin McKittrick for Homer Electric Association’s board of directors as well as Mitch Roth for Chugach Electric Association; quantified and offset the carbon footprint of the Kachemak Bay Conservation Center through the use of voluntary carbon offsets; maintained a strong social media presence; hired a consultant to analyze various Alaskan investment portfolios to tease out how much is invested in hydrocarbon assets; supported the ‘Divest the APFC’ campaign; petitioned the DNC to host a 2020 presidential debate solely focused on climate change; and thrown our full weight behind the national ‘Energy Innovation and Carbon Dividend Act,’ and more.

Just as summer 2019 has been a sobering wake up to the climate crisis, Alaska has also been slapped with a cruel budget crisis.There is a common foe at the core of both of these crises’—the fossil fuel industry.

The International Monetary Fund (IMF) released a report in May of 2019. Their research found that globally (191 countries) fossil fuel subsidies are costing taxpayers, $5.2 trillion a year. The largest subsidizers in 2015 were China ($1.4 trillion), United States ($649 billion), Russia ($551 billion)... All told, coal and petroleum together account for 85 percent of all global subsidies.

This year, here in Alaska, we will pay $1.26 billion to the fossil fuel industry through the per-barrel oil tax credit program. If we do not soon repeal this wrongheaded subsidy, our state will lose tens of billions of dollars over the coming decade.

Ending this fossil fuel subsidy, however, is only the first step. In order to arrest the climate crisis and protect our rights to life, liberty and the pursuit of happiness, we must make consuming fossil fuels more expensive to account for the harm they are causing to our communities, state, nation, world, and biosphere.

It has been estimated that 1 ton of CO2 costs the planet several hundreds of dollars in damages. The University of Alaska’s Institute of Social and Economic Research (ISER) calculate that climate change in Alaska will have an annual net cost of $340-$700 million above normal wear and tear. The average American, for reference, produces roughly 20 tons of CO2 every year.

Alaska State Senator Bill Wielechowski and Senator Gray Jackson have sponsored a bill - SB-14 - to repeal the per-barrel oil tax credit. The passage of this bill would end the egregious and wasteful subsidy, would temporarily solve Alaska’s fiscal crisis, and help us confront the hard fact that fossil fuels can no longer be the silver bullet for Alaska’s economy. What we are currently doing is backwards. Fossil fuel consumption must become more expensive to account for the negative and costly effect this habit has on our planet, not cheaper by artificially propping these products up in the marketplace.

It is time to come together as Alaskans to fight climate change, defend our way of life and embolden the industries of the future. By throwing our full weight behind Alaska’s untapped renewable energy potential, we will become a desirable place for businesses to invest, communities to prosper, and innovation to occur.

As we hurl toward the deadline to cut our emissions by 45%, we must demand more from our elected leaders and our elected leaders must be well informed by climate science. Every one of us must become climate literate, but we can no longer allow ourselves to be led by people that don’t understand physics and chemistry - because these are the true governors of our society, and they don’t care which party you belong to or how rich your donors are.

Please support our efforts. Become a member or make a donation by clicking HERE.